My studies of benthic aquatic organisms have concentrated on distribution and abundance but have included the effects of waste discharges and colonization by invasive species.

Distribution and population estimates of freshwater mussels in the Salmon and Little Salmon rivers, New York. This survey started in 2006 and was completed in 2012. It is based on systematic sampling of transects with about 30 quadrats sampled in each transect. Thirteen species of living mussels have been collected, dominated by Elliptio complanata and followed by Lampsilis radiata. Pyganodon grandis was collected for the first time in 2009 in the Salmon River but it has been collected in Ontario, across the St. Lawrence River from the Salmon River. Three Margaritifera margaritifera were collected in 2012.

Lampsilis ovata (or it might be L. cardium) damaged by outboard motor, and deformed Elliptio complanata (right).

Pictures of adult and juvenile mussels from the Salmon River are on the Photo Gallery page. Collections from other sites are represented as well.

Many mussels show signs of forcible entry (arrows), most likely by muskrats but could also be from raccoons. These shells show bite marks where a predator forced its incisors between the valves. Predation damage like this was found in shells ranging from 32 to 106 mm in length from 2005 to 2012. About 14% of shells in the middens did not have any predation marks. 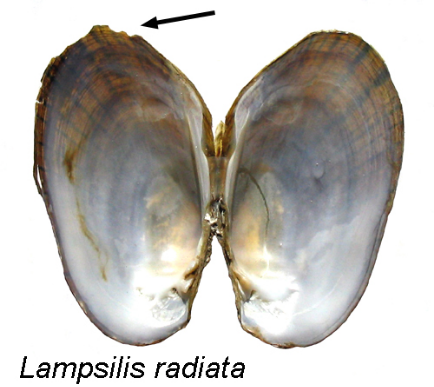 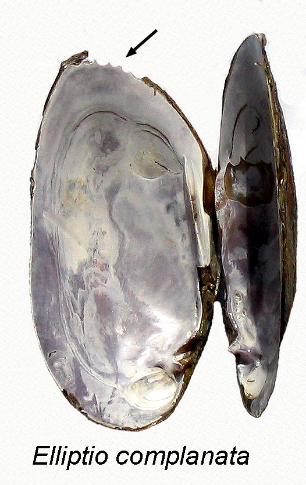 Some descriptions of mussel middens implied a neat pile of shells. The middens I found had shells scattered across an area of up to 2 meters in diameter. Middens were near the water and associated with flat rocks, logs, or in hollows eroded under tree roots where the muskrat (presumably) could dine in relative comfort. The picture below shows a midden under an eroded tree trunk. More than 145 complete shells were in this midden and shells were found up to a meter under the bank. 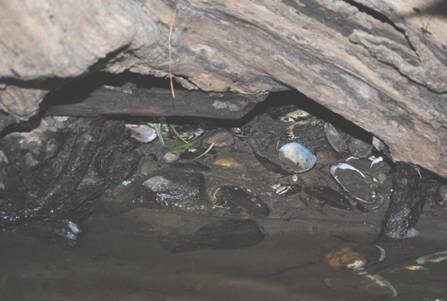 Habitat loss and mortality of unionid mussels in the Salmon River, New York, following removal of the Fort Covington Dam. The rapid draining of the reservoir resulted in stranding more than 3000 mussels of 9 species along the shorelines and in two embayments adjacent to the reservoir. The shoreline habitat represented only 5.8% of the reservoir surface area but was habitat for 83% of the estimated mussels within the reservoir.

I have collected 17 objects that resemble worms in four riffles in the Salmon River. These objects range in size from 5 to 7 mm and are variable in shape. They could be composed of calcium phosphate (suggested by Dr. Karen Chin) but were not affected by acetic acid (pH 2.8) over a period of 7 days. The following pictures show some of these objects. The red color is artificial resulting from rose bengal stain in the preservative. The true color is white. The pictures include a cross-section and a longitudinal section, both of which suggest that there is an internal structure but it could be an artifact as well 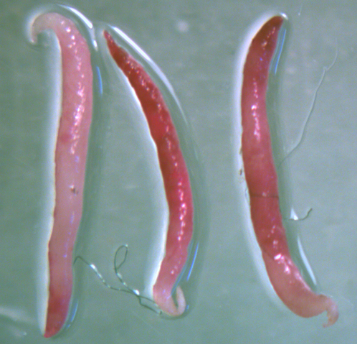 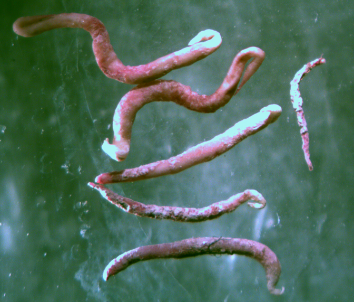 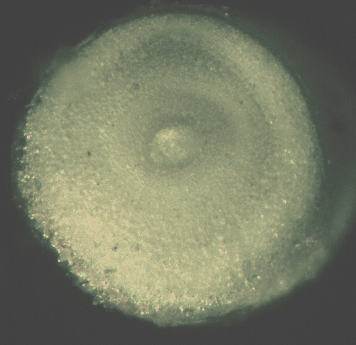 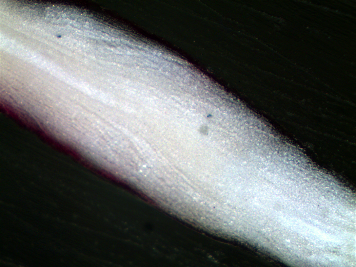 Several colleagues have suggested the following as to identity of these objects:

excretions from bivalves or crayfish, or root tips. However, they do not resemble root tips that I collected. It is possible that these could be coprolites, perhaps from crayfish, but there is no evidence for this, as yet. If anyone has a suggestion, I would be pleased to hear it.

Recent benthic collections in Oneida Lake have produced an invertebrate that has been identified by Chris Rogers as an immature terrestrial millipede, genus Polyxenus. It's presence in aquatic samples could be explained most easily as having been introduced into the samples from the collecting gear. The bundles of posterior macrosetae and the antennae were diagnostic as to identity. 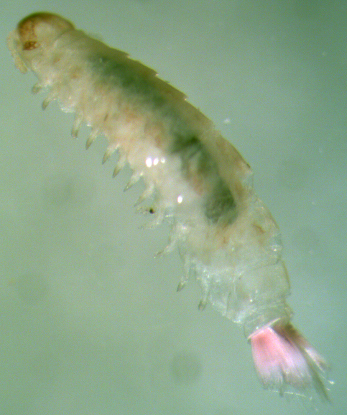 One individual, shown below, was also collected at the same site and might be a less developed version of the millipede. This organism has a length of 2 mm and the natural color is probably white; the red color in this image is from the rose bengal stain in the preservative. 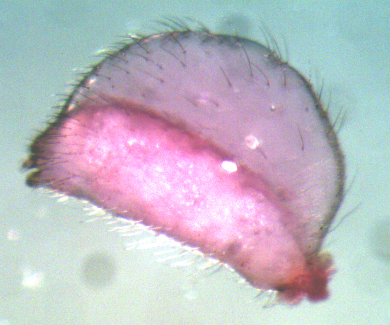 Larger millipedes were collected in 2016 (0.5 mm) but do not resemble those collected earlier, as seen in the photo below. 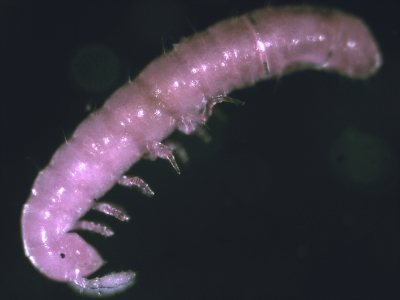 A possible egg case, perhaps woven by a spider, was found in a benthic sample from Oneida Lake in 2017. The case is 2.5 mm in height and has a circular top that might have been opened when the organism hatched. New Zealand mud snail: 72 mud snails (Potamopyrgus antipodarum) were collected in three locations near Grindstone Island in the Thousand Islands region of the St. Lawrence River, mostly from deep water (>13 m) from 1995 through 1997. These range from 4 to 5.5 mm in length. This invasive species had been reported from Prescott, Ontario, in 1994. 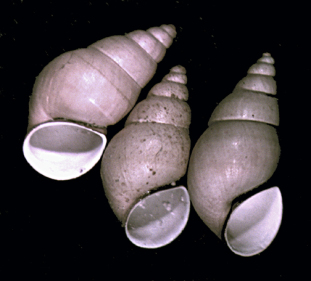 An ornamented freshwater snail, Gyraulus crista, was collected from Flynn Bay, a shallow bay in the St. Lawrence River near Clayton, New York. These snails are 2 mm in diameter. 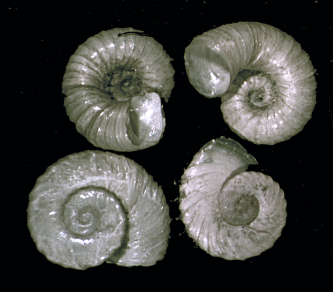